Our last day of secrets… 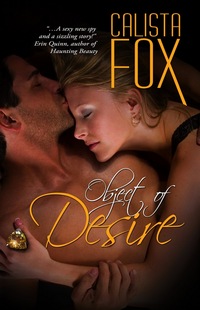 Psssttt… I’ve Got a Secret, too!

Well, actually, this girl has more than one secret!

No, wait. Six. I have six secrets.

Now for my biggest secret yet. I know… my July 15 single title release, Object of Desire, isn’t a big secret given its current buzz, but this is still a very exciting time for me!

I’d literally stumbled upon a publisher that welcomed unrestricted creativity and sensuality. After my first novella was published by Red Sage, my Big Goal became writing a novel that I could pitch to Red Sage as their next single title book. I knew the characters would have to be bold and daring, and the plot would have to be fast-paced, complex and dynamic. And the romance sizzling hot!

I love the larger-than-life hero and heroine—Devon Mallory and Laurel Blackwood—and I hope readers find them to be memorable characters as well. And since I’m a perpetual student of character development, I hope you’ll leave a comment and tell me your favorite fictitious character and what earned them the distinction.

About Object of Desire by Calista Fox (on sale July 15!)

When treasure hunter and spy Laurel Blackwood raids Victoria Peak in Belize to recover a rare Mexican fire opal rumored to evoke dark desires and passions, she unwittingly sets off a sequence of dangerous events—and finds herself in the midst of a battle between good and evil… and lust and love. Laurel must keep the opal from falling into the hands of a deadly terrorist cell, a greedy Belizean dignitary, and one particularly hot and scandalous treasure hunter named Devon Mallory.

For ten years, Devon has had his eye on the $30 million prized opal and his heart set on winning Laurel for keeps. But her web of secrecy and now her betrayal over recovering the legendary stone without him has Devon hell-bent on stealing the opal from her and collecting on the massive payout. But Devon will have to make a choice soon, and decide which gem is his true object of desire…

Thanks Calista and all of the authors for a great week!

Readers, today is your last chance to enter this week’s great giveaway…details can be found here.

Be sure to check back tomorrow to see if you won!

This entry was posted on Friday, July 24th, 2009 at 4:28 am and is filed under Special Event. You can follow any responses to this entry through the RSS 2.0 feed. You can leave a response, or trackback from your own site.

13 Responses to Our last day of secrets…